New York and the International Sound of Latin Music, 1940-1990 (University Press of Mississippi, 2021), An assessment, celebration, and careful notation of the extraordinary melting pot of Latin music. 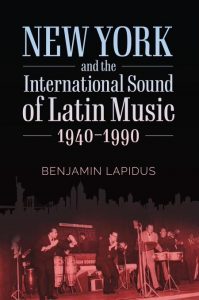 New York City has long been a generative nexus for the transnational Latin music scene. Currently, there is no other place in the Americas where such large numbers of people from throughout the Caribbean come together to make music. In this book, Benjamin Lapidus seeks to recognize all of those musicians under one mighty musical sound, especially those who have historically gone unnoticed.Based on archival research, oral histories, interviews, and musicological analysis, Lapidus examines how interethnic collaboration among musicians, composers, dancers, instrument builders, and music teachers in New York City set a standard for the study, creation, performance, and innovation of Latin music. Musicians specializing in Spanish Caribbean music in New York cultivated a sound that was grounded in tradition, including classical, jazz, and Spanish Caribbean folkloric music. For the first time, Lapidus studies this sound in detail and in its context. He offers a fresh understanding of how musicians made and formally transmitted Spanish Caribbean popular music in New York City from 1940 to 1990.Without diminishing the historical facts of segregation and racism the musicians experienced, Lapidus treats music as a unifying force. By giving recognition to those musicians who helped bridge the gap between cultural and musical backgrounds, he recognizes the impact of entire ethnic groups who helped change music in New York. The study of these individual musicians through interviews and musical transcriptions helps to characterize the specific and identifiable New York City Latin music aesthetic that has come to be emulated internationally.
Also available at Amazon

“I had been waiting a long time for a comprehensive historical assessment of New York as the capital of Latin music in the mid-twentieth century. Benjamin Lapidus far exceeds expectations. His multilayered portrait is ambitious, meticulous, surprising, and a delight to read. Bravissimo!”

“In the enormous casserole that Lapidus uses to present this history, he does not forget an ingredient that many other authors leave out: women. And this musical chef, Lapidus, presents it in exquisite form. Enjoy it, bon appétit!”

“The result is a comprehensive assessment of New York as the capital of Latin music from 1940 to 1990, as told by an active participant and an eyewitness. ”

“New York and the International Sound of Latin Music, 1940-1990 is an important foundation for such endeavors and should inspire historians to think about how Gotham’s diverse population helped shape 20th-century musical traditions that were simultaneously American and Latinx. ”

“There are very few books that document the origin and development of Latin music in the US. This work is of tremendous importance because it illustrates many unknown facts about Latin musicians’ identities and contributions to the Latin and jazz genres that would have continued to be ignored, if not rescued by Ben Lapidus and his reporting. The book is obligatory reading, and I fully recommend it. ”

“Based on extended interviews and incorporating insightful musical analysis, the author explores an array of fascinating topics: the history of Latin music pedagogy, the history of instrument makers and innovators, the contributions of Panamanian and Jewish musicians, the influence of female musicians and entrepreneurs, and the impact of the Mariel exodus on performance, to name only a few. ”

– Robin D. Moore, professor of ethnomusicology at the University of Texas at Austin

“Lapidus’s book is a much-needed detailed history of Latin dance music’s storied place in New York City, giving the reader unique insights into the complexities and richness of the history of this music. ”

“A major achievement, this book exuberantly shares with its readers the richness of music making during an extraordinarily fecund period of New York City’s history. ”

– Jairo Moreno, author of Musical Representations, Subjects, and Objects: The Construction of Musical Thought in Zarlino, Descartes, Rameau, and Weber

Origins of Cuban Music and Dance: Changüí (Scarecrow Press, 2008) is the first and only in-depth study written in English or Spanish on the changüí music and dance genre of Guantánamo, Cuba. 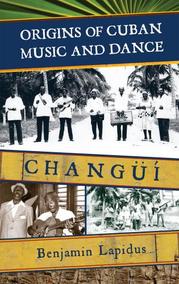 In this ground-breaking study of changüí, Ben Lapidus sheds light on a lesser-known but important genre of Cuban music, providing detailed analysis of its musical form while at the same time situating it in the broader context of eastern Cuba’s unique history and music culture.

Lapidus synthesizes his ethnographic and historical research to present an indispensable text on one of Cuba’s and the Caribbean’s least documented and studied musical and dance genres. The author argues for an ethnographically-based alternative to the standard evolutionary construction of the Cuban son’s historical development by showing that changüí, nengón, and kiribá—the son’s perceived “antecedents”—are not only distinct in their performative dimensions, but they also continue to contribute in their own idiosyncratic ways to the local and contemporary soundscape of Guantanamo. Herein lies Lapidus’s major scholarly contribution to the kind of popular music studies that eschews a linear evolutionary framework of music history and instead focuses on the meanings generated where memory, history, performance, and the local, national, and transnational intersect.

“Yo tengo sentido, tengo rima: Cano Estremera and the Art of the Soneo,” in Centro: Journal of the Center for Puerto Rican Studies Puerto Rican Music: RicanStructing Roots and Routes, vol. 2 (October 2004).